< Back to author list
Amisho Baraka Lewis (born January 10, 1979), better known by his stage name Sho Baraka, is an American Christian hip-hop artist and writer who has recorded both independently and as a founding member of the 116 Clique. He was originally signed to Reach Records until leaving in March 2011. He then co-founded a record label and group known as "High Society" with fellow Christian rappers JR, Swoope, and Suzy Rock. His debut album Turn My Life Up was released in November 2007. His second album Lions and Liars, was released March 2010. His third album Talented Xth was released in January 2013. His fourth album, The Narrative, was released in October 2016.
Format
hardcover
Language
english
Condition
new
used

FILTER BY
SORT BY
Sort By
Displaying 1 product 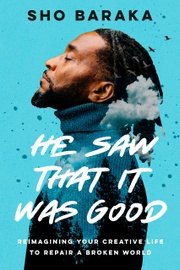 He Saw That It Was Good: Reimagining Your Creat...